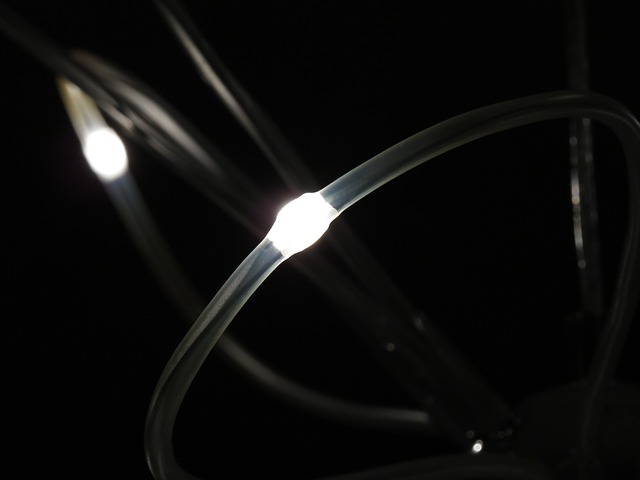 A treehouse on the Wild Walk at the Wild Center in Tupper Lake, seen Friday, is bathed in LED light.
(Christopher Lenney/Watertown Daily Times)

TUPPER LAKE — Wild Lights at the Wild Center is an immersive artwork that combines music, lights and nature to create a winter fairyland outside the natural history museum.

In its second year, Wild Lights is divided into two walks, Forest Music and Wild Walk.

The lights, around 55,000 of them, were strung on 101 trees along the path, museum education team member Shannon V. Surdyk said.

The LED lights come in nine colors and cast a colorful glow over the white snow and contrast with the dark woods beyond the path.

Thousands of lights have been installed in the Forest Music section of the Wild Center in Tupper Lake to create Wild Lights, an enchanting, illuminated, winter wonderland with a specially composed soundtrack.
(Christopher Lenney/Watertown Daily Times)

The music was composed by Whatever Penny, an indie rock group from New Jersey that worked with the museum and sculptor Barny Barringer to complete the experience. Mr. Barringer’s sculptures are spread out though the woods.

“Wild Lights is really just designed to get people outside and enjoying the outdoors with family and friends and exploring nature in a fun and playful way,” Ms. Surdyk said.

The music comes from speakers hidden in the woods. It surrounds the listeners, seeming to come from every direction at once.

The Wild Walk is an elevated path that takes people to the top of the forest and visits some of the museum’s more popular features, like the Spider’s Web and Eagle’s Nest.

“New this year is the Stickwork sculpture,” Ms. Surdyk said. “Artist Patrick Dougherty and his son Sam were here for three weeks in August, and with the help of our staff and about 200 volunteers, they built a sculpture out of maple saplings.”

Wild Lights — an enchanting, illuminated, winter wonderland with a specially composed soundtrack — is on display through February at the Wild Center in Tupper Lake.
(Christopher Lenney/Watertown Daily Times)

During the walk along the Wild Walk path, the Stickwork sculpture slowly reveals itself.

“Some people have said it looks like a gingerbread house,” Ms. Surdyk said.

Lit up with white LED lights, the sculpture has several entrances that lure viewers inside. Once inside, viewers are met with rooms and pathways, twisted through the structure built entirely of intertwined maple saplings.

The sculpture is clearly made of this world, but looks like it came from elsewhere.

Children race through the sculpture, gazing out its windows, while adults stand in the center, their heads tilted back, slowly spinning in circles to take it all in.

Visitors at the Wild Center in Tupper Lake take photos Friday in front of Stickworks, a sculpture made of weaved, snagged, flexed and sustainably sourced local saplings illuminated by thousands of lights.
(Christopher Lenney/Watertown Daily Times)

The exhibit opened in November and will remain open through the end of February. Reservations are required and there is a limit of 500 visitors per night.

The exhibit is proving …….